Home » IFTTT » Mashable » This moving fan story about George R.R. Martin will make you tear up

This moving fan story about George R.R. Martin will make you tear up 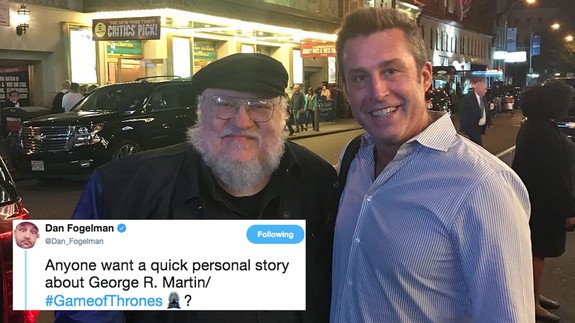 Game of Thrones has finally returned, and to celebrate the first episode of the final season, fans are flooding social media with talk of the show.

Among the memes, theories, and episode recaps, however, was an extraordinarily moving fan story about a past encounter with George R.R. Martin, author of the book series, A Song of Ice and Fire, which inspired the show.

In a Twitter thread, Dan Fogelman, creator of the hit NBC drama This Is Us, told the story of a time his friend Alex Hanan met the famous author. And like most everything Fogelman writes, it was an emotional roller coaster.

Anyone want a quick personal story about George R. Martin/#GameofThrones?