REQUISITES OF THE HOME VEGETABLE GARDEN. 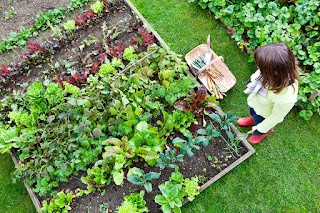 In deciding upon the site for the home vegetable garden it is well to dispose once and for all of the old idea that the garden "patch" must be an ugly spot in the home surroundings. If thoughtfully planned, carefully planted and thoroughly cared for, it may be made a beautiful and harmonious feature of the general scheme, lending a touch of comfortable homeliness that no shrubs, borders, or beds can ever produce.

With this fact in mind we will not feel restricted to any part of the premises merely because it is out of sight behind the barn or garage. In the average moderate-sized place there will not be much choice as to land. It will be necessary to take what is to be had and then do the very best that can be done with it. But there will probably be a good deal of choice as to, first, exposure, and second, convenience. Other things being equal, select a spot near at hand, easy of access. It may seem that a difference of only a few hundred yards will mean nothing, but if one is depending largely upon spare moments for working in and for watching the garden and in the growing of many vegetables the latter is almost as important as the former this matter of convenient access will be of much greater importance than is likely to be at first recognized. Not until you have had to make a dozen time-wasting trips for forgotten seeds or tools, or gotten your feet soaking wet by going out through the dew-drenched grass, will you realize fully what this may mean.

But the thing of first importance to consider in picking out the spot that is to yield you happiness and delicious vegetables all summer, or even for many years, is the exposure. Pick out the "earliest" spot you can find a plot sloping a little to the south or east, that seems to catch sunshine early and hold it late, and that seems to be out of the direct path of the chilling north and northeast winds. If a building, or even an old fence, protects it from this direction, your garden will be helped along wonderfully, for an early start is a great big factor toward success. If it is not already protected, a board fence, or a hedge of some low-growing shrubs or young evergreens, will add very greatly to its usefulness. The importance of having such a protection or shelter is altogether underestimated by the amateur.

The chances are that you will not find a spot of ideal garden soil ready for use anywhere upon your place. But all except the very worst of soils can be brought up to a very high degree of productiveness  especially such small areas as home vegetable gardens require. Large tracts of soil that are almost pure sand, and others so heavy and mucky that for centuries they lay uncultivated, have frequently been brought, in the course of only a few years, to where they yield annually tremendous crops on a commercial basis. So do not be discouraged about your soil. Proper treatment of it is much more important, and a garden- patch of average run-down, or "never-brought-up" soil will produce much more for the energetic and careful gardener than the richest spot will grow under average methods of cultivation.

The ideal garden soil is a "rich, sandy loam." And the fact cannot be overemphasized that such soils usually are made, not found. Let us analyze that description a bit, for right here we come to the first of the four all-important factors of gardening food. The others are cultivation, moisture and temperature. "Rich" in the gardener's vocabulary means full of plant food; more than that and this is a point of vital importance it means full of plant food ready to be used at once, all prepared and spread out on the garden table, or rather in it, where growing things can at once make use of it; or what we term, in one word, "available" plant food. Practically no soils in long- inhabited communities remain naturally rich enough to produce big crops. They are made rich, or kept rich, in two ways; first, by cultivation, which helps to change the raw plant food stored in the soil into available forms; and second, by manuring or adding plant food to the soil from outside sources.

"Sandy" in the sense here used, means a soil containing enough particles of sand so that water will pass through it without leaving it pasty and sticky a few days after a rain; "light" enough, as it is called, so that a handful, under ordinary conditions, will crumble and fall apart readily after being pressed in the hand. It is not necessary that the soil be sandy in appearance, but it should be friable.

"Loam: a rich, friable soil," says Webster. That hardly covers it, but it does describe it. It is soil in which the sand and clay are in proper proportions, so that neither greatly predominate, and usually dark in color, from cultivation and enrichment. Such a soil, even to the untrained eye, just naturally looks as if it would grow things. It is remarkable how quickly the whole physical appearance of a piece of well cultivated ground will change. An instance came under my notice last fall in one of my fields, where a strip containing an acre had been two years in onions, and a little piece jutting off from the middle of this had been prepared for them just one season. The rest had not received any extra manuring or cultivation. When the field was plowed up in the fall, all three sections were as distinctly noticeable as though separated by a fence. And I know that next spring's crop of rye, before it is plowed under, will show the lines of demarcation just as plainly.