Home » »Unlabelled » THE CULTIVATION OF VEGETABLES.

THE CULTIVATION OF VEGETABLES. 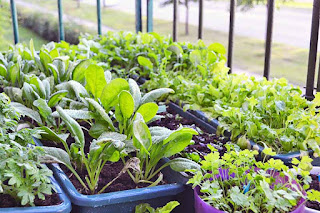 Before taking up the garden vegetables individually, I shall outline the general practice of cultivation, which applies to all.

The purposes of cultivation are three to get rid of weeds, and to stimulate growth by (1) letting air into the soil and freeing unavailable plant food, and (2) by conserving moisture.

As to weeds, the gardener of any experience need not be told the importance of keeping his crops clean. He has learned from bitter and costly experience the price of letting them get anything resembling a start. He knows that one or two days' growth, after they are well up, followed perhaps by a day or so of rain, may easily double or treble the work of cleaning a patch of onions or carrots, and that where weeds have attained any size they cannot be taken out of sowed crops without doing a great deal of injury. He also realizes, or should, that every day's growth means just so much available plant food stolen from under the very roots of his legitimate crops.

Instead of letting the weeds get away with any plant food, he should be furnishing more, for clean and frequent cultivation will not only break the soil up mechanically, but let in air, moisture and heat all essential in effecting those chemical changes necessary to convert non- available into available plant food. Long before the science in the case was discovered, the soil cultivators had learned by observation the necessity of keeping the soil nicely loosened about their growing crops. Even the lanky and untutored aborigine saw to it that his squaw not only put a bad fish under the hill of maize but plied her shell hoe over it. Plants need to breathe. Their roots need air. You might as well expect to find the rosy glow of happiness on the wan cheeks of a cotton-mill child slave as to expect to see the luxuriant dark green of healthy plant life in a suffocated garden.

Important as the question of air is, that of  water  ranks beside it. You may not see at first what the matter of frequent cultivation has to do with water. But let us stop a moment and look into it. Take a strip of blotting paper, dip one end in water, and watch the moisture run up hill, soak up through the blotter. The scientists have labeled that "capillary attraction" the water crawls up little invisible tubes formed by the texture of the blotter. Now take a similar piece, cut it across, hold the two cut edges firmly together, and try it again. The moisture refuses to cross the line: the connection has been severed.

In the same way the water stored in the soil after a rain begins at once to escape again into the atmosphere. That on the surface evaporates first, and that which has soaked in begins to soak in through the soil to the surface. It is leaving your garden, through the millions of soil tubes, just as surely as if you had a two-inch pipe and a gasoline engine, pumping it into the gutter night and day! Save your garden by stopping the waste. It is the easiest thing in the world to do cut the pipe in two. By frequent cultivation of the surface soil not more than one or two inches deep for most small vegetables the soil tubes are kept broken, and a mulch of dust is maintained. Try to get over every part of your garden, especially where it is not shaded, once in every ten days or two weeks. Does that seem like too much work? You can push your wheel hoe through, and thus keep the dust mulch as a constant protection, as fast as you can walk. If you wait for the weeds, you will nearly have to crawl through, doing more or less harm by disturbing your growing plants, losing all the plant food (and they will take the cream) which they have consumed, and actually putting in more hours of infinitely more disagreeable work. If the beginner at gardening has not been convinced by the facts given, there is only one thing left to convince him experience.

Having given so much space to the  reason  for constant care in this matter, the question of methods naturally follows. Get a wheel hoe. The simplest sorts will not only save you an infinite amount of time and work, but do the work better, very much better than it can be done by hand. You  can  grow good vegetables, especially if your garden is a very small one, without one of these labor-savers, but I can assure you that you will never regret the small investment necessary to procure it.

With a wheel hoe, the work of preserving the soil mulch becomes very simple. If one has not a wheel hoe, for small areas very rapid work can be done with the scuffle hoe.

The matter of keeping weeds cleaned out of the rows and between the plants in the rows is not so quickly accomplished. Where hand-work is necessary, let it be done at once. Here are a few practical suggestions that will reduce this work to a minimum, (1) Get at this work while the ground is soft; as soon as the soil begins to dry out after a rain is the best time. Under such conditions the weeds will pull out by the roots, without breaking off. (2) Immediately before weeding, go over the rows with a wheel hoe, cutting shallow, but just as close as possible, leaving a narrow, plainly visible strip which must be hand- weeded. The best tool for this purpose is the double wheel hoe with disc attachment, or hoes for large plants. (3) See to it that not only the weeds are pulled but that  every inch  of soil surface is broken up. It is fully as important that the weeds just sprouting be destroyed, as that the larger ones be pulled up. One stroke of the weeder or the fingers will destroy a hundred weed seedlings in less time than one weed can be pulled out after it gets a good start. (4) Use one of the small hand-weeders until you become skilled with it. Not only may more work be done but the fingers will be saved unnecessary wear.

The skilful use of the wheel hoe can be acquired through practice only. The first thing to learn is that it is necessary to watch  the wheels only:  the blades, disc or rakes will take care of themselves.

The operation of "hilling" consists in drawing up the soil about the stems of growing plants, usually at the time of second or third hoeing. It used to be the practice to hill everything that could be hilled "up to the eyebrows," but it has gradually been discarded for what is termed "level culture"; and you will readily see the reason, from what has been said about the escape of moisture from the surface of the soil; for of course the two upper sides of the hill, which may be represented by an equilateral triangle with one side horizontal, give more exposed surface than the level surface represented by the base. In wet soils or seasons hilling may be advisable, but very seldom otherwise. It has the additional disadvantage of making it difficult to maintain the soil mulch which is so desirable.

There is another thing to be considered in making each vegetable do its best, and that is crop rotation, or the following of any vegetable with a different sort at the next planting.

With some vegetables, such as cabbage, this is almost imperative, and practically all are helped by it. Even onions, which are popularly supposed to be the proving exception to the rule, are healthier, and do as well after some other crop,  provided  the soil is as finely pulverized and rich as a previous crop of onions would leave it.

Here are the fundamental rules of crop rotation:

(4) Quick-growing crops should follow those occupying the land all season.

These are the principles which should determine the rotations to be followed in individual cases. The proper way to attend to this matter is when making the planting plan. You will then have time to do it properly, and will need to give it no further thought for a year.

With the above suggestions in mind, and  put to use , it will not be difficult to give the crops those special attentions which are needed to make them do their very best.
--
Publié par AYMEN TANAZEFTI à 15:30